skip to main | skip to sidebar

*Ladies and Gentlemen please welcome our guest, Ruth Long. As you can tell our minds have a lot in common, since we named books almost the exact same thing. On the other hand her Soul Fire (as opposed to my Soul OF Fire) has more in common with my Shakespeare series, in its view of the relation between fairies/elves and mankind. Give her a warm Mad Genius Club Welcome. SAH* 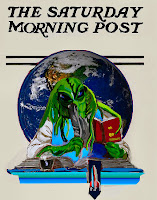 I'm in the middle of rewrites on my YA fantasy May Queen set in a fairytale realm just a short step away from our own. It's the world where our fairytales come from, where Sleeping Beauty slumbers on, where valiant knights slay dragons, where true love is just waiting to be discovered.

Only... it isn't like that at all. It's dark and dangerous, there's no knowing who to trust and how far they can be trusted, and true love might be the most dangerous thing of all.

There's something so engaging about a new twist on an old story. The familiarity of the old is coupled with a spark of surprise that breathes new life back into it.

Myths, folklore, legends breathe a depth of life into our stories, adding layers and layers of meaning that we as writers would be hard pressed to work in ourselves. The joy of using folklore is that our readers, through a life-time of experiencing that story, will do it for us.

When I was writing my novel Soul Fire, I used the folklore of England and Ireland, in particular the fairy folklore that was carried between the two. My hero, Daire (named for the oak, which is his sacred tree - the protector of the forest just as he is protector of his people) is one of the Sidhe, the fairy race of Irish folktales. These aren't the fairies the Victorians gave us. They're warriors, human sized and rarely friendly to humankind. More than that, one beautiful nugget of legend tells us, they are the angels who would not pick a side in the war in heaven and were banished to the earth as soulless wanderers, forever denied heaven for their crime of faithlessness. Taking elements such as this transforms the thought of a fairy lover into something far more dangerous and thrilling.

But how could I find a match for someone like this? In Rowan (also named for a tree - the Mountain Ash, said to make mortals immune to the charms of the fairies), I used the idea of the artist as creator, listening to a muse, fuelled by divine, creative energy. But Rowan has buried her own artistic abilities in favour of nurturing it in others and running a gallery in a small town. Rowan has been running from things most of her life, though she puts on an image of a confident and self-assured businesswoman. She has set aside her dreaming, romantic self for practicality and self-sufficiency. She is determined to survive on her own abilities.

By bringing two opposites together, we have immediate conflict. Writers and readers know this, and relish it. Throw a vengeful dark Sidhe into the mix and the tension goes up a notch. Make her Daire's treacherous former-lover and it heads through the roof.

I also asked a very simple question - since the Sidhe were so dangerous to humans, what if it worked the other way? What if the human world and human beings were just as dangerous an environment to them? It is summed up in a simple rhyme that, in the book, every Sidhe child is taught from the cradle.

Iron born and iron bred,
Trust not iron it will see you dead.

If we have our folklore about them, why shouldn't they have the same sort of stories about us?

The combination of very human conflicts with the supernatural always intrigues me. No matter how powerful a being is, they have desires and drives, motivations which can be as relatable to us as anything in contemporary fiction. It brings the human element into the supernatural story and draws the reader with it. And if you're anything like me, there's nothing better than being pulled right into the heart of a story and feeling, as 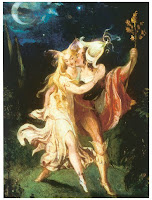 well as reading, it unfold.

Myths do this. They are close to our hearts. They are stories we learned as children and precious to each of us. We all have our favourites - Beauty and the Beast, Deirdre of the Sorrows, the Steadfast Tin Soldier, Tristan and Iseult, Snow White, The Goose Girl and many many more. They address basic themes that the original tellers wanted to share, that their listeners wanted to hear and the stories resonate with us still today because those themes are universal. The stories repeat across mythologies, across races, and across generations. They change, they adapt, they are cleaned up or dumbed down, but the basic core story continues on. Becuase they address something really important in our psyche.

And the older versions have an uncanny way of making themselves heard. That darkness seems to seep around the edges of the pasted-on, biscuit tin image and as readers, I think we react to it instinctively, whether it appears in the text or not. We know it should be there. We half-remember it, even though it isn't there. As part of my research I've been reading a number of books on anthropology. One thing shines through so clearly. There are many other stories, many of which have been forgotten. And yet their ghosts remain. They linger in the background of the legends we have. They insinuate themselves into stories which might otherwise be entirely factual. The human mind is designed to spot patterns. How many of us have, on a glance, noticed a face in woodgrain, or caught a glimpse of "something" in the shadows? The mind works that way on stories too.

I love to catch a sense of a greater story, of depth and ages beyond the story I am currently reading. The sense of "I know this" even if I've never read it before. The inevitable is so powerful. A thrill of recognition, the excitement of seeing if you are right or if you just imagined it. That's not the same as predictability - we don't want that. But a sense that the story must work out that way because something older and more vast than an author is guiding it. Because it HAS to.

Because that's what stories do.

It's part of what gives the reader that sense of satisfaction at the end of a book. All is right and we are content. Or, turning it on its head, all is wrong and we are left uncomfortable and brooding.

Myths and legends - whether overtly part of the tale, or skillfully woven through an otherwise non-paranormal tale - give us that sense of history, background and weight that can bring the story on to another level. Our stories grow beyond what words are put onto paper, and the telling of a tale (as would have happened long ago) becomes a shared experience, where author and reader bring their own interpretation, knowlege and expectations to the process.

It's a moment of magic.

Isn't it odd how there seems to be something coded into our subconscious that makes these stories resonate so much more than others made out of whole cloth? It's almost as if we have a need to ponder certain questions, as humans.
And I came acros a lot of theories for elves and fairies, but never the "neutral angels" one. Who knew? I thought I'd left no flagstone unturned.

Do you find it hard to get to the avalanche-like inevitability without tripping over "Oh, I know how this story ends" reaction? I have, as an example, completely burned out on King Arthur. No matter how many twists you throw in, the Good Guys lose. It's like asking my husband if he wants to see _Titanic_ "Why? The boat sinks, everybody dies."

Do you use the background and start a whole new story? Or do you need to wind in the traditional to invoke the power of the myth on our back brains?

Thanks for having me!

I think that there must be certain questions we need an answer for. There's so much crossover between different legends. And people tend to reuse story elements so with the two combined, I suppose its inevitable.

Matapam - I think it comes down to the characters. Whenever I think I know where a story is going my characters can usually throw enough spanners in the works to make the outcome completely unpredictable! Stories I really love tend to take something with which I am familiar and transform it. The power of myth works in the background until it kind of jumps out at you, like some kind of twisted surprise party. :)

Great post, Ruth. I always like hearing from writers that actually do the research for mythic novels, rather than just spewing common misconceptions and calling it authentic lore.

As I was reading about your novel, I realized it sounded familiar -- Sarah let me take her Kindle to the doctor's office and -- on my own -- I chose to start reading Soul Fire, which I found very compelling.

To MGC readers, ignore any genre biases you may have and take a look at this romantic fantasy -- you won't regret it.

I think some things keep coming back as stories because they hit where we live. Immortality in a whole bunch of forms, what it means to be human... They're universals.

Matapam - I have a take on Camelot where they win. So thp!

I think people love those old stories because we are looking for something larger than ourselves. Those mythic people lived on a grand scale. It's intoxicating.

Ruth, great post. I love the old English and Celtic tales and I love even more when an author can successfully weave them through a novel. I think you are so right about the darkness in the old versions of the myths seeping around the edges of the feel-good versions we see so often now. Frankly, I like the darker versions; they seem more "real", striking a mix of fear and want. Who hasn't thought about living forever, of having powers no one else has? Who isn't afraid, on some primal level, of coming up against someone with those powers, of being tempted by them?

Kate, what you do to innocent little stories shouldn't be allowed...

time differences being what they are crossing the veil... er I mean in Ireland, I'm playing catch up!

Dan I'm so glad you enjoyed Soul Fire. It's always a thrill to hear that. I love doing research. Maybe a little too much. :)

As everyone has said - I think myths touch on universal themes and temptations. We can put ourselves in those situations because we know the stories so well. And as Rowena said there's the scale of the stories. No one just fusters around with a quest, gives up and goes for a cup of tea. Or maybe they do but not in the stories I love. Although... ;)

Myths and legends - whether overtly part of the tale, or skillfully woven through an otherwise non-paranormal tale - give us that sense of history, background and weight that can bring the story on to another level.